Riding uphill is all that counts 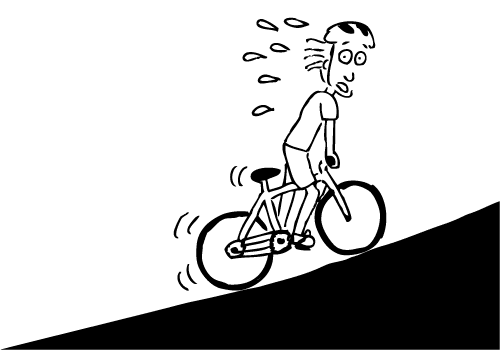 No pain - no gain

Since last year I always wanted to test my legs on the short but steep ascent to the center of Mt. Saleve which is the closest mountain to Geneva. On a sunny afternoon I decided therefore to give it a try and headed by car to Collonges sous Saleve with the MTB on the roof. From the center of the village the road immediately climbs and leads to the small neighboring village of Le Coin from where the real climb starts. The road was in pretty good shape with only a few holes and I advanced rather fast. The hairpins are wonderful and the few cars didn't disturb me much. In less that an hour I made it to the first col, Col de la Croisette at the junction of the two roads which join at a village with the same name in about the center of that table mountain. From there the view towards the Alps is breathtaking but instead of a break I decided to immediately continue towards my final destination, Col de Pitons towards the western end of Saleve mountain, where I arrived about 20min. later.
After taking a few photos I returned to Croisette for a coffee break before rolling back down to Collonges.

My second climb of the year was up into the Swiss Jura on perfectly tarmaced Route de la Dole with my Norwegian friend Lasse. We started at my place and warmed up while approaching the start of the slope at Cheserex. I opted for the MTB as it is still start of the season and the inclination is at some places well above 10%. As the last barrier was still closed and road signs still crossed out to indicated that the road is not yet officially open we hardly met other traffic. After a break at the top to recharge the batteries we descended back via La Rippe and had our deserved beer at Crassier before heading back home.

After a long winter break of nearly 4 months out of the saddle I couldn't wait to pedal again, preferrably uphill, so I decided to climb the closest col to my home - Col de la Faucille. I usually descend it after one of the many MTB ascents into the Jura (Col de Crozet, Col de Combe Blanche, La Baudichonne or Col de la Givrine) but this time I wanted to test my fitness level after a very intense XC skating season. Last November, after reading one of the many higly interesting web posts of my cycling hero Will, I decided to learn a new winter sports in order to gap the period between the last climb of the season and the inauguration ride of the following.
The beginning was very tough and I thought I would never learn the technique and attain a fitness level to reach a niveau where this sport would actually lead to some sort of pleasure, but after an initial course I took in early 2014 and many practice outings, I slowly learned the different steps and my stamina increased slowly but steadily. At the end of the winter I had still not discovered all slopes of La Vattey, the closest XC ski domain to where I live up in the Jura between Col de la Faucille and La Cure, the border village between F and CH. I'm very happy about what I achieved in only a few months and keen to discover more XC spots in the area, but now it's cycling time again and the list of "climbs-to-do" is probably far too long for one summer...

Here a few photos of the first ride on the racer: 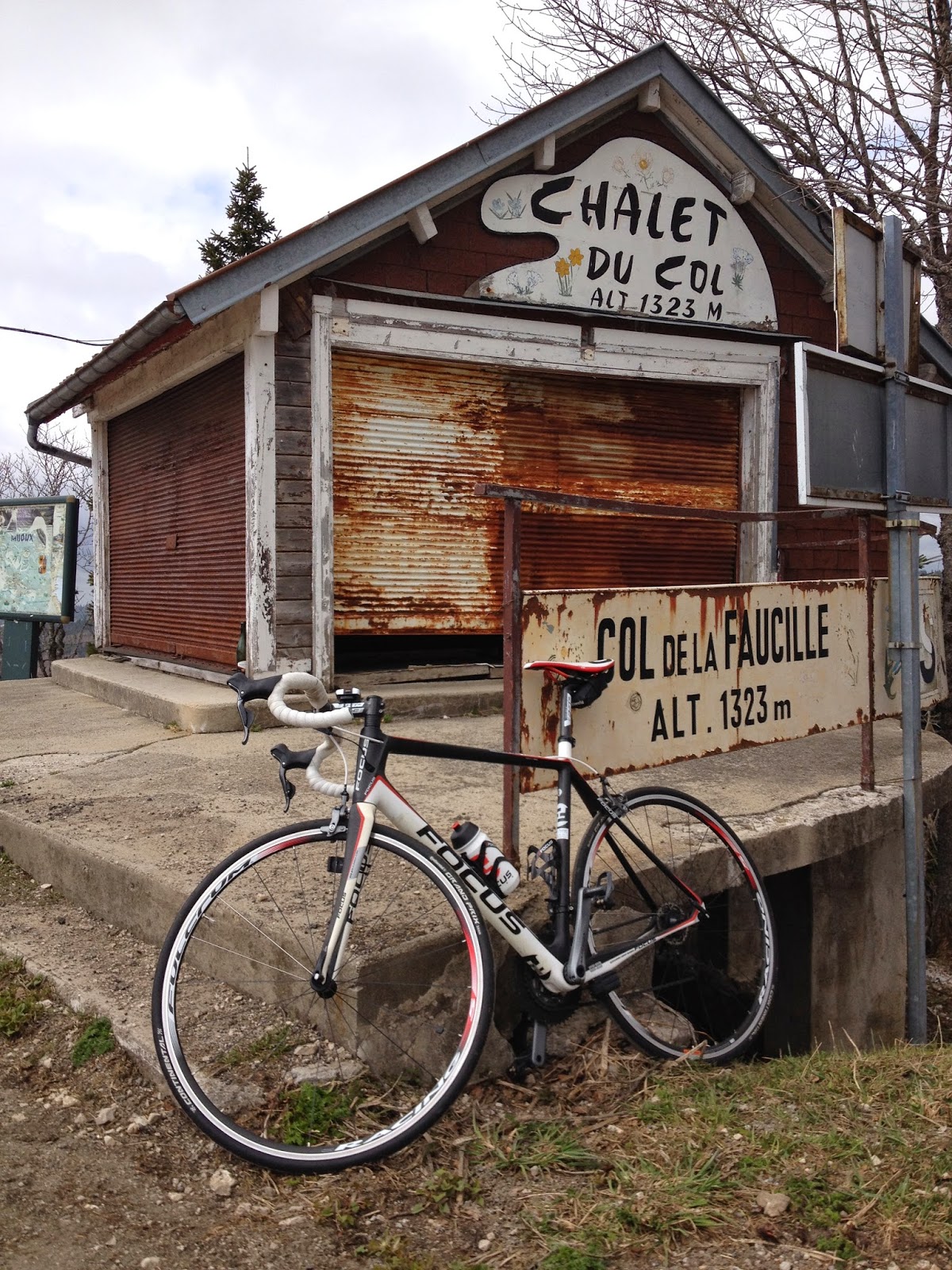 On a perfect autumn day I decided to climb Lac de Mauvoisin on my MTB before the arrival of snow. I started in Le Chable where I left the car and pedaled my way up the Val de Bagnes. As I advanced into the valley the traffic got less and less but temperatures were still in their lows due to the fact that I was mostly riding in the shade of the mountains, heading south-east. I hadn't had lunch yet and was waiting for a nice place to pick nick in the sun, which I finally found in the small village of Bonatchiesse. From there I could already spot the wall of the dam. About half an hour later I was standing atop of the dam and enjoyed breathtaking views. To get to the dam wall one has to pass a small tunnel at the end of the paved road and then turn left. As this is Switzerland of course everything is perfectly signposted. 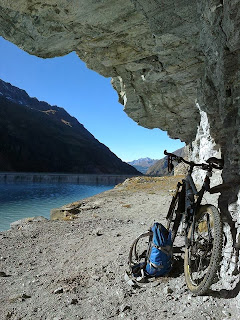 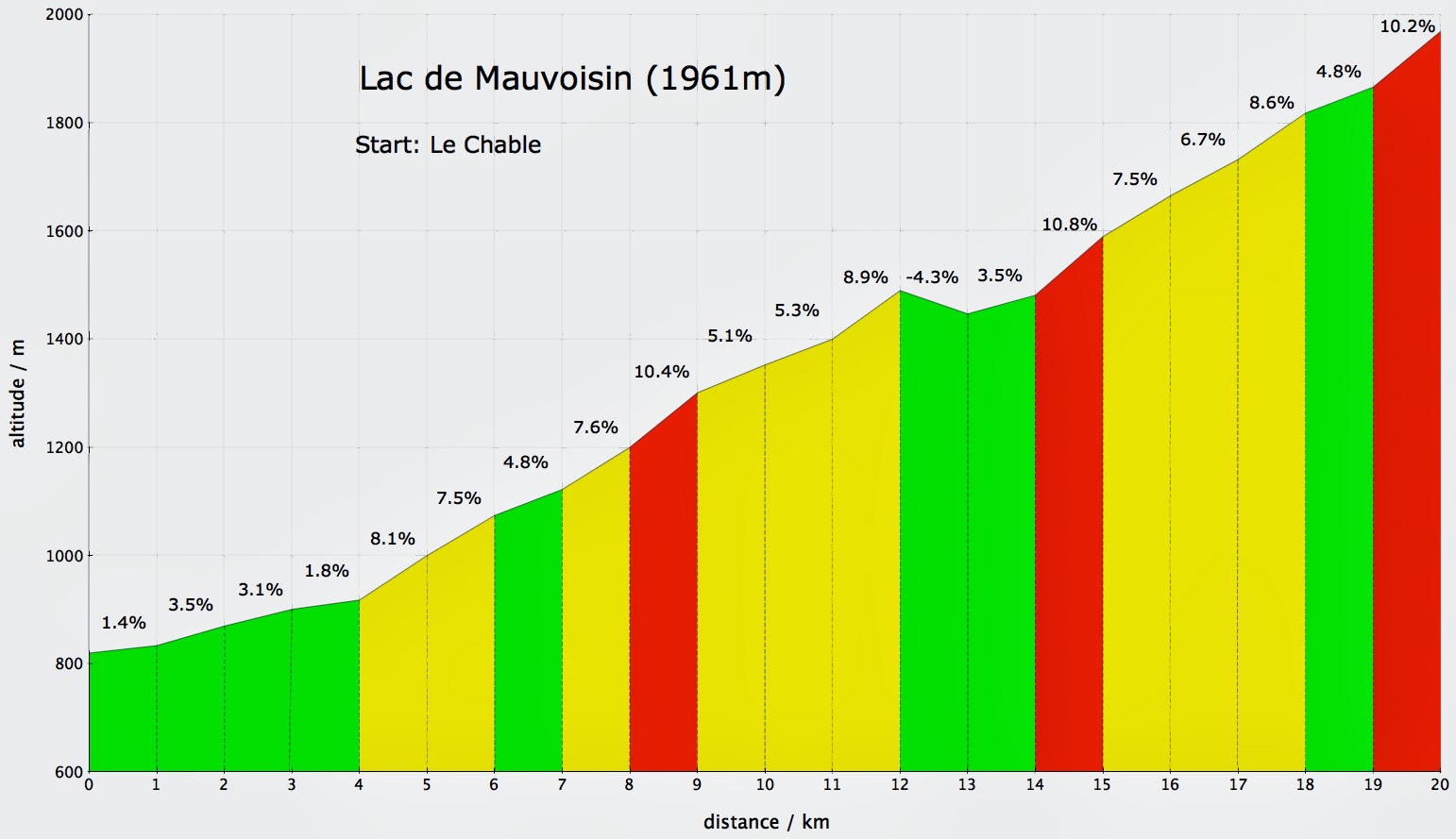 I have had an eye on this climb since a long time and decided to try it finally before the arrival of winter. Last Friday the weather conditions were perfect for that tough ascent. I started in the early afternoon from the parking lot of the SPA at Lavey les Bains. As I had read the decsription of Will Davies about this climb, I knew more or less what to expect. The first 10 kilometers were on perfect swiss tarmac and pedaling up the 29 hairpins to Morcles through the autumn forest was a pure pleasure although pretty hard due to the slope. Many military trucks went up and down that narrow road because just after Morcles there is a military camp. At Morcles I stopped for a quick coffee and an energy bar. The nice road continued steadily uphill and after 3 more kilometers the tarmac ended and a fantastic gravel road started. The slope didn't change a lot and 300 altimeters higher I needed another break. Sitting on the grass beside the road I enjoyed the nice views towards lake Geneva, the valley and the mountains on the opposite side. 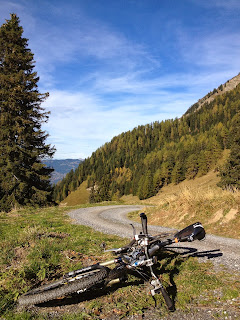 It was already getting a bit late and I wasn't sure if I would make it to the top at 2200m. 10min. later I was again on the saddle and slowly moving uphill in the smallest gear. After passing the last mountain huts I suddenly arrived at a closed barrier with a signpost saying "Road closed, bridges removed". 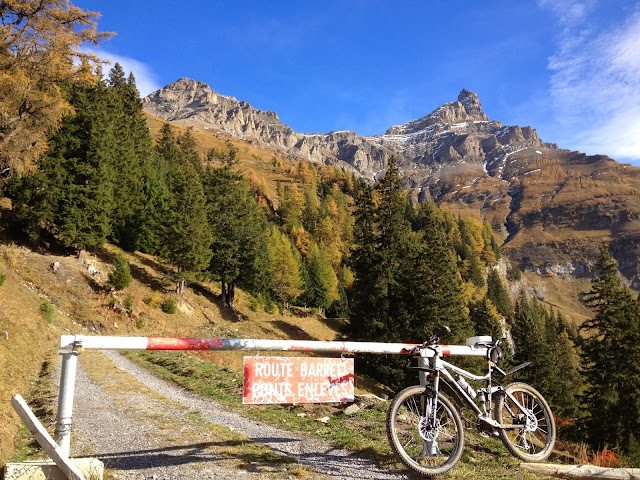 I couldn't believe what I read and was very surprised as I had not read anything about a possible road closure or bridge removal and so I decided to check it out myself. Passing the barrier wasn't a problem. I continued on a very nice but steep forest road until I hit the first bridge, or better the remains of it. The signpost was indeed no joke, they really had removed the bridges and I was stuck at about 1800m. 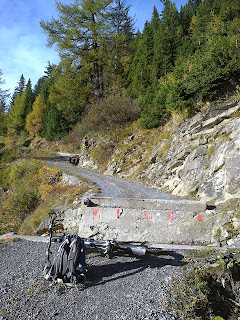 I took a few pictures up there before returning back to the barrier were I met a hiker who came up by car with the intention to walk to "Cabane de la Tourche", at 2200m. He said he often hikes in that area after work.
I shot my last photos and started a nice descent back to the car parking. Exhausted but happy I drove back home and decided to return here next summer with the plan to terminate the unfinished business of climbing La Rionda and Cabane de la Tourche.
While searching the web for information on that climb I found out that according to www.climbbybike.com this road is considered the 29th steepest in the world ! Although not having arrived at the top I still felt a bit proud of what I had accomplished...I was only 400 altimeters and 3km below the top. 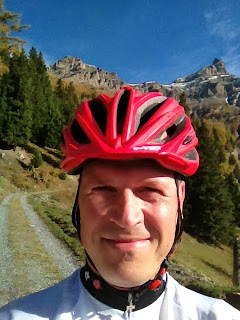 The chart below speaks volumes... 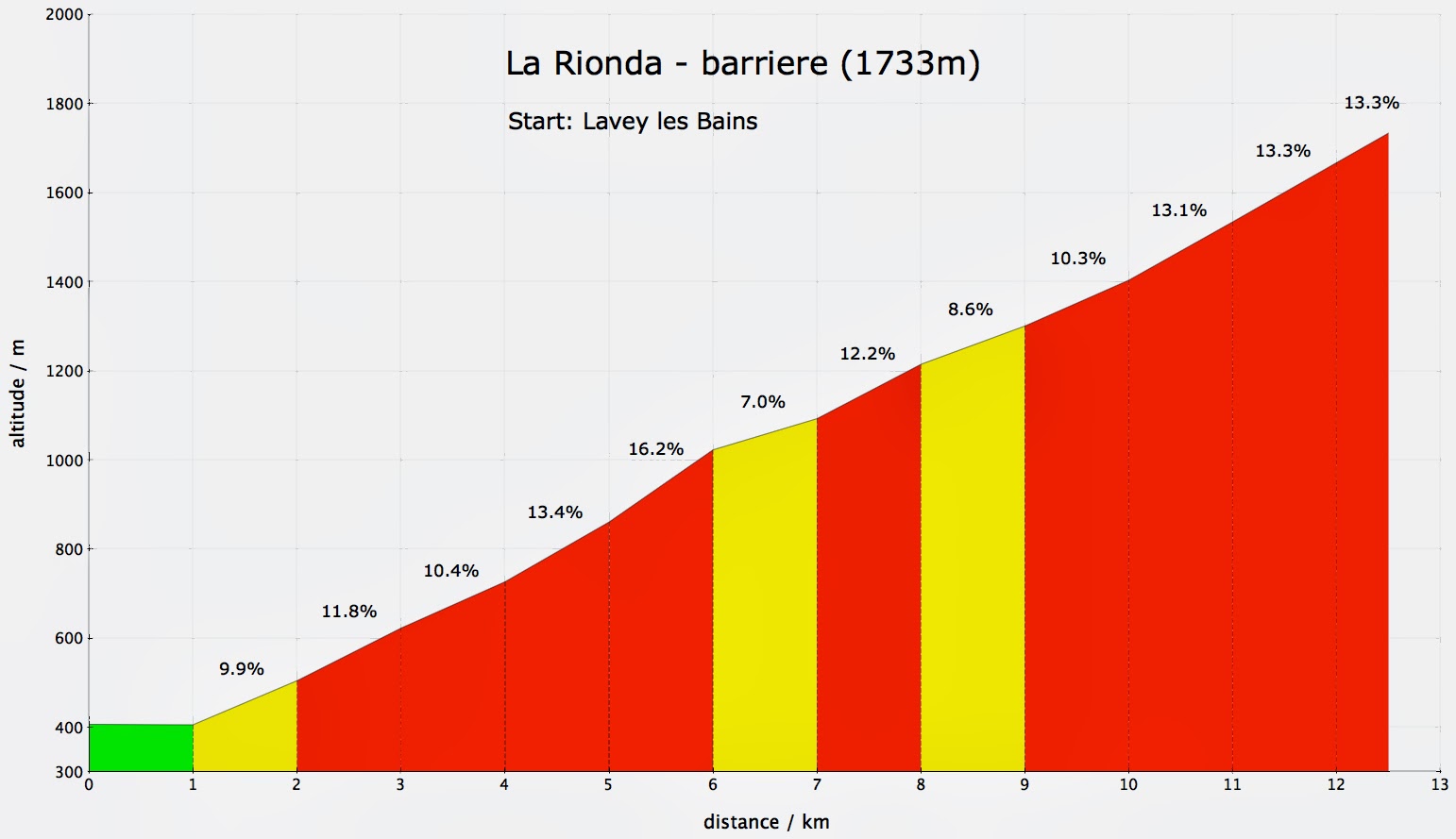 Our third trip on the MTBs started from home towards St. Cergue and initially we wanted to visit the cheese farm "Les Fruitieres de Nyon", but once arrived at St. Cergue we decided to continue our climb towards France and closing the loop by returning via Col de la Faucille. Instead of following the road with heavy traffic, we chose an alternatice path away from traffic leading through farm land at the foot of La Dole mountain. We had a detailed cycling map with us but still got a bit lost as the forrest path abruptly stopped and transitted into a grass path which was difficult to identify. Thanks to our well developped navigation skills we nevertheless managed to stay on track and finally found the connection to the gravel and later tarmac path connecting to the road to Lau Baudichonne, a place which I have already climbed several times from the Swiss side of the Jura but never from today's side.The weather got really nice in the early evening hours and we were riding back to Col de la Faucille via La Vattay in beautiful sunshine. After a short photo stop at the pass we put on our wind breakers and plunged down to Gex and back home...a wonderful afternoon ride which turned into the discovery of unknown territory around La Dole mountain. 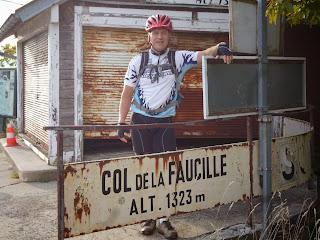